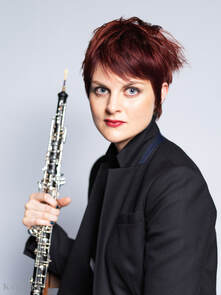 As a seasoned professional oboist, I perform in orchestras and chamber music collaborations across New York City and the Midwest.

I'm a member of the Orchestra of the Bronx and the Bronx Opera and previously served as Associate Principal Oboe and English Horn of the South Bend Symphony Orchestra and the Chicago Symphony's Civic Orchestra. I've performed for two Broadway tours of Wicked, the Pine Mountain Music Festival, the Peoria Bach Festival, and numerous early music collaborations at the University of Notre Dame Sacred Music Program. I earned a Master of Music from Northwestern University and a Bachelor of Music from Baldwin-Wallace University.

​ I'm equally as passionate about performing the music of our own time as I am about Bach arias.

Check out my upcoming and recent performances here, or listen to some past ones below!